There are a number of banks in Jamaica and they ALL fall under a specific category.

There are central banks, commercial banks, merchant banks, building societies, and credit unions, just to name a few. Each type of bank serves a different purpose.

Let me explain what each type of bank is...

Central Banks - The Central Bank stands at the center of the local financial system and is charged with the responsibility to promote and maintain financial system stability. To achieve this objective, the Bank supervises the activities of deposit-taking entities.

In addition, the Bank seeks to promote the development of the local financial markets, and regulates and supports the major clearing and settlement systems. 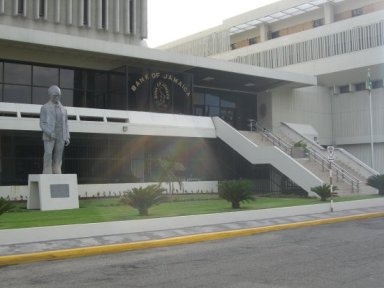 Commercial Banks - A commercial bank is a type of bank that provides services such as accepting deposits, making business loans, and offering basic investment products.

Commercial banks can also be referred to as a retail bank, which is a division of a bank that mostly deals with deposits and loans from corporations or large businesses, as opposed to individual members of the public.

Below is a list of the commercial banks in Jamaica operating as at August 31, 2013.

Merchant Banks - A bank that deals mostly in (but is not limited to) international finance, long-term loans for companies and underwriting. Merchant banks do not provide regular banking services to the general public. A merchant bank also provides advisory on corporate matters to the firms they lend to.

Merchant Banks Operating under The Financial Institution Act as at August 31, 2013:

Building Societies - a financial organization which pays interest on investments by its members and lends capital for the purchase or improvement of houses. "Building society" was first introduced as a term in 19th century England from groups of co-op savers in the building trades. These institutions are now major competitors of banks in the U.K. and are the equivalent of U.S. savings and loan institutions. Building societies can also be found in other countries, such as Australia, Ireland and Jamaica.

Building Societies Operating in Jamaica as at August 31, 2013:

What is a Credit Union? - A credit union is a co-operative financial institution, which is owned and controlled by its members. Credit unions are not-for-profit, and exist to provide a safe, convenient place for members to save money and obtain loans and other financial services at competitive rates. Members of a credit union share a common bond, such as their occupation, where they live or even attend church.

Read more about the Credit Unions of Jamaica here...

The above data is the most current on the amount and types of banks in Jamaica. I hope you click each link to each bank and read more about the particular bank you prefer.

Top of Banks In Jamaica