Jamaican Cuisine
From Then to Now!!

Jamaican cuisine was brought about by the island's early settlers.

There are a lot of items and recipes that were generated by the Arawaks, the British, the Spanish, the Africans (who were brought to Jamaica as slaves), the Indians, Jews, Chinese and other Caribbean islanders amongst settlers.

These foods were prepared using various cooking styles known only to them and was adopted by generations following them.

Most, if not all, meals were cooked on an old-time coal stove and baked products were produced in a
brick oven.

Modern upgrades and cooking methods have now been applied and that does not change the
way we prepare our meals or it alters the taste in any evident way.

Let me give you some insight as to where our Jamaican cuisine is coming from. 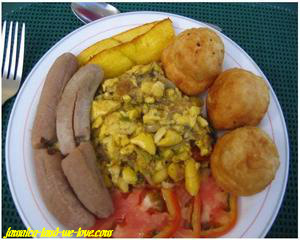 History Behind the Food 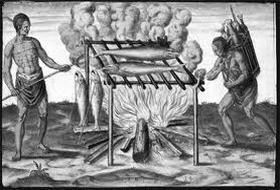 Long before the brick oven and the coal stove though there was a piece of apparatus called the "barbacoa" which was a wooden grate that stood on four forked sticks placed over a slow fire. This was what the Arawak Indians used to spit-roast fish and meats. This was the barbeque grill their time. The process is now perfected and the cured or cooked meat is what we now know today as the famous "jerk".

This is applied to today's chicken, pork, fish and sausage. 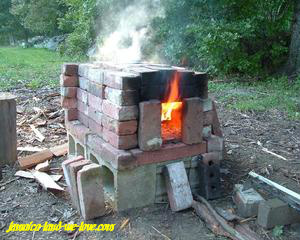 They also brought with them corn, sweet potatoes, callaloo, beans, guavas, pineapples, papayas (or most commonly known as pawpaw), fish, conies, iguanas, crabs and cassava (which they used to make bread). So their contribution to the ingredients we now use in our Jamaican cuisine is invaluable.

Now the Spanish came to Jamaica in the year 1494 and it was some 150 years after they came they brought with them additional food items such as cattle, pigs, goats, horses and lard from animal fat.

They were also great contributors of trees and fruits such as the Seville and Valencia oranges, lime, lemon, tamarind, ginger, pomegranate, date palm, plantain, coconuts, grapes, figs, sugar and bananas.

These items added another wide variety to our cuisine and popular dishes such as escoveitched fish and peas and bean dishes were originated in Spain.

The British led the island from the year 1655 until we gained independence in 1962. They introduced breadfruit, otaheite apples, ackee, mangoes, rose apples, oranges, mandarin, turmeric, black pepper and coffee. They were also apart of the sugar cultivation led by the African slaves and they exported rum and molasses in exchange for pork, flour and pickled fish.

Many English dishes and sweets still remain in the Jamaican cuisine including corned beef, salt beef, roast beef, Christmas pudding, Easter bun, tarts, pies, jams and marmalades. Our fondness for the famous porridge was said to be a legacy of the Scots.

The Africans had their contribution in the likes of duckunoo and fufu. The famous mackerel and bananas (rundown) and the national dish, ackee and saltfish, are both inventions of the African peasants.

The Indians who were brought to Jamaica as indentured labourers brought their culinary skills with them and they were the ones that created and left with us the famous curried goat. Pak choy is also a vegetable originating out of China.

The Jamaican cuisine, however, is most famous for its two most popular "exports" - the world famous Blue Mountain coffee and the hot and spicy jerk cooking. Most of Jamaican cooking is hot and spicy, and even though we are versatile and have adopted other delectable tastes, nothing attracts the visitors as much as the jerk. 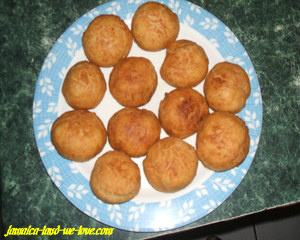 I am very proud to say that Jamaican cuisine is highly accepted and favored by worldwide travelers. Our richness in delicacies and variety in spices is what makes our food so special both locally and internationally.

Today hotel menus boast the famous dishes alongside international cuisine because the variety of life make things a bit more interesting for our taste buds. What I have done is made a few recipes available for you to attempt and enjoy. The methods are easy and most, if not all, ingredients can be found anywhere in the world, whether through produce exports or canned so you have no excuse if you would want to try a recipe and have the taste of Jamaica at your fingertips.

Enjoy cooking and eating Jamaican cuisine, and submit your feedback when you have tried and appreciated the taste of some of our world known dishes.

Also, be sure to check out the explanations on some of the most famous and popular Jamaican Foods.