St Elizabeth Jamaica is said to be the second largest parish on the island. It boasts a measurement of approximately 1212.4 square km.

The capital of St. Elizabeth is Black River. Coincidentally, the river itself, Black River, is the longest river on the island.

This parish lies to the south west end of Jamaica.

It falls in the county of Cornwall and has a population of roughly 148,000 residents according to the 2001 census.

For the geographically inclined persons, St. Elizabeth is located at Latitude 18°15'N and Longitude 77°56'W. 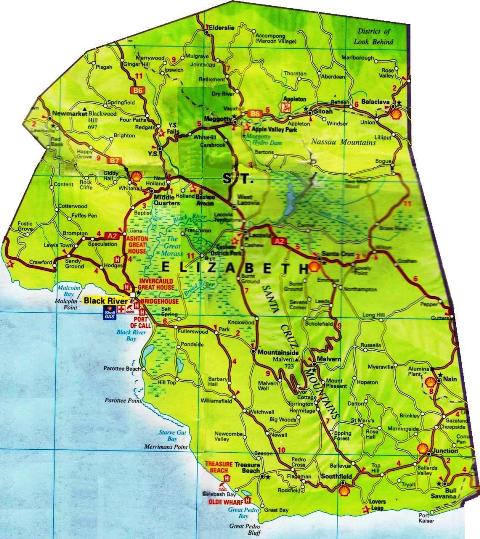 St. Elizabeth was named in honour of Lady Elizabeth Modyford, wife of Sir Thomas Modyford, the governor of Jamaica from 1664 – 1671. St. Elizabeth provides the best testimony of the Jamaican motto – “Out of many, one people”.

A distinct feature of this parish is the interesting racial or ethnic heritage of its inhabitants. The Meskito (corrupted to ‘Mosquito’) Indians brought to Jamaica to help capture the Maroons, were allowed to settle in southern St. Elizabeth in return for their assistance. The parish of St. Elizabeth can lay claim to Maroon, Dutch, Spanish, Indian, mulatto and white inhabitants from the 17th century onwards, with the result that there are those who feel that more people of mixed ancestry can be found here than in any other part of the island.

St. Elizabeth is also home to one of the driest areas in Jamaica – the Pedro Plains which has tested the ingenuity of St. Elizabeth farmers who have devised several ways of adapting to suit the nature and limited fertility of the area.

In the early years of its being settled, and up to the early part of this century, the dry cool climate of the hills made places like Malvern became a popular vacation spot for wealthy Jamaicans and ‘expatriates’. Located some 762 metres (2,500 ft) above sea level, Malvern’s climate has been rated eighth best in the world, giving rise to its nick-name – “Ridge of Health”. Malvern is also the home of St. Elizabeth’s three largest educational institutions – Bethlehem Teachers' College, Hampton Girls School and Munro (originally known as Potsdam) College.

Black River is one the oldest towns in the island and is reportedly the first to have received electricity. The Leyden brothers were among the earliest settlers in the parish, and they are said to have imported Jamaica’s first motor-car. They are also said to have introduced race-horses to the island, thereby aiding in the establishment of the once famous Black River Race Track.

St. Elizabeth has 44 caves. The following are some of the more popular ones:

a. Mexico – longest in the island.

b. Peru Cave – located near Goshen, it displays an impressive growth of stalactites and stalagmites.


St Elizabeth Jamaica has a lot to offer and so the next time you visit this parish be sure to check out places you haven't been to before instead of the usual spots.