Jamaican Independence was attained on August 6, 1962. However, let me take you down the historic road leading up to Jamaica becoming an independent nation.

Like the rest of the world, Jamaica in 1929 began experiencing a depression in its economic growth. This resulted in a continuous decline in social conditions. By 1938, the workers in an effort to improve their situation went on strike and related upheavals ended with the death of a few workers. The 1938 labour riots was another turning point in the history of the people of Jamaica.

Sir Alexander Bustamante who emerged as leader of the new labour movement founded the Bustamante Industrial Trade Union (BITU) later to be associated with the Jamaica Labour Party. In 1938 Norman Manley, the island's foremost barrister, and a cousin of Bustamante formed the People's National Party.

Manley led the country to Self Government and Bustamante later became the first Prime Minister of Independent Jamaica.

By 1944, adult suffrage was granted giving all males and females 21 years of age and over, the right to vote. The journey towards Self Government had begun.

The first election under Universal Adult Suffrage was held in 1944 and the Jamaica Labour Party won 25 out of a total of 32 seats.

The Federation of the West Indies was launched in 1959 and Jamaica was a part of this group. In 1961, a referendum was called to determine whether or not the people of Jamaica should remain a part of the Federation. The Jamaican people voted for Independence. 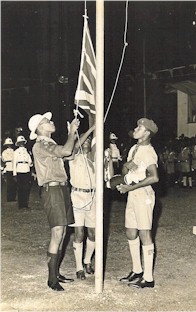 In January 1962, a draft of the Independence Constitution was brought before both Houses and after a full debate was unanimously approved. It was also agreed that the 300 year old Coat of Arms would be retained and the Latin motto "Indus Uterque Serviet Uni" changed to one in English "Out of Many One People".

In February 1962, a new Constitution was approved by the Legislature and the Premier, Norman Manley, called General Elections. Alexander Bustamante was elected in April and became the first Prime Minister of Jamaica.

At midnight 5th August 1962 the British Flag was lowered and the Jamaican Flag was hoisted for the first time. On the 6th of August 1962, Jamaican Independence became a reality. Jamaica was an Independent Nation and a member of the British Commonwealth. Sir Kenneth Blackburne was the last Colonial Governor and the first Governor General. Afterwards, Sir Clifford Campbell, formerly President of the Senate, became the first Jamaican Governor General.

Jamaica becoming an Independent Nation, this now meant that Britain no longer controlled the affairs of the country. It was now the responsibility of the newly elected Prime Minister and the locally elected Cabinet.

Independence also meant that a Constitution, national symbols, emblems, an army, Jamaican currency and passports had to be developed for the country.

As an Independent Nation, Jamaica assigns Ambassadors overseas who represent the country. They sign treaties on behalf of Jamaica and become members of various international organizations. This is important, as it gives Jamaica equal rights on various issues relating to international trade, policies and treaties.

Every year on August 6, (previously first Monday in August), Jamaicans celebrate the removal of our dependence on Britain, to control specific functions of the country. At this time we also honour all those persons who were responsible for the transfer of power.

In October, during National Heritage Week (third Monday in October), we also honour our six National Heroes and one Heroine, in recognition of their contribution to the birth of our nation.

I am proud to be a product of the Jamaican Independence era. I learnt, in school, about the struggles my forefathers faced in getting us to where we are today and I salute them.

Jamaica - Out of Many One People! One Love!!