Welcome To Jamaica -
Island In the Sun

Welcome to one of the greatest Caribbean islands there is - JAMAICA!! or JA if you wish!

I would assume you are here on this site because you would love to know more about my little island, right? That's what I thought. That is exactly why I have decided to take the time to create, "Jamaica-Land-We-Love.com."

I will be taking you on a journey through time to ensure that you get as much out of the history and current affairs information as you would need. I will also be available to answer your questions, if the need arise, about anything you wish to learn more about or get clarification on.

Well, enough about that. Let me give you a short outline of what will be included in this site.

Let us listen to this famous festival song by Eric Donaldson - The Land of My Birth. Enjoy!!

Now wasn't that relaxing? Doesn't this song bring back memories? To all those who love Jamaica but are not Jamaican, I am sure you enjoyed it too, right? There will be a lot more music and dancing to come on this site and you will enjoy every minute of it, guaranteed.

Below you will find pictures of two of our National Symbols. You will get to know more about them as you navigate the site. Just to give you a bit of information - there are actually six national symbols and they are ALL written about in detail.

A List Of What You Will Be Learning About

Note: the following list is in no particular order!

You will learn a lot about JA and its history through a variety of topics which includes:

You will get a chance to view some of our most beautiful, breathtaking, and mouthwatering photos - even the ones that include me personally!!

Just to show you what I mean, here is a photo of our national dish in all its glory. One taste of this dish and you will be coming back for more! 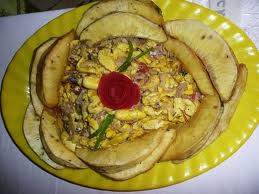 Ackee and Saltfish with fried Breadfruit

So please, take your time and navigate through the site to learn more on the areas that you would LOVE to know more about and do share the info with others who you know have questions about sweet, sweet JA.

On the note of sweet, take a listen to one of our many songs from "Tony Rebel - Sweet Jamdung." It was recorded some time ago, in about 1993. I am sure you will enjoy it.

Those songs were selected to put you in a "feel-good" mood to go forth and learn more about JA.

Remember, if you have any questions or queries please feel free to CONTACT ME and I will get back to you in a reasonable time frame.

Top of Jamaica Land We Love

Some Pages To Take A Look At!