The Jamaican doctor bird is an outstanding bird.  It is one of 320 species of hummingbirds and the most unique.

The scientific name for the doctor bird is "Trochihlus Polytmus."

There are two types of these birds.

Question: Where else in the world can you find this specie of the hummingbird?...

...The swallow tail humming bird is indigenous to Jamaica, that is, it lives ONLY in Jamaica. That is why it is so unique among its other characteristics. 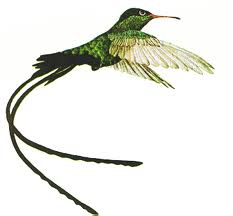 These humming birds have beautiful feathers and they have NO counterpart in the entire bird population.

They produce iridescent colours - meaning they show luminous colors that seem to change when seen from different angles. This is a characteristic only of that family.

In addition to their beautiful feathers, the mature male sports a tow long tail which streams behind him when he is in flight.

There seem to be a bit of unsettled thoughts with regards to the origin of the name ‘Doctor-bird’. It has been said and speculated that the name was given because of the erect black crest and tails that resembles the top hat and long-tail coats that were worn by doctors in the old days.

However, other schools of thought believe that the name came about because of the way the birds lance the flowers with their bills to extract nectar.

**Nectar is their main source of food, however, they also eat spiders and other insects. They feed mostly throughout the day and rest during the nights to preserve energy.** 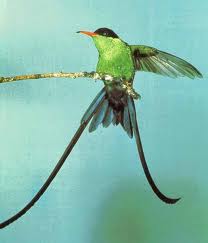 However, the humming bird species is aptly named due to its ability to fly backwards producing a humming sound from the rapid fluttering of its wings.

Whichever way it is looked at, this bird has so many features that many 'thoughts' can be made to the reason behind its name!

Here is a bit of historical background about the Jamaican doctor bird...

There was a great 19th century English Naturalist named Philip Henry Gosse, who came to Jamaica in 1844 to collect and paint insects, plants, and birds. He got his first glimpse of a Doctor Bird while he was sitting in a calabash tree studying orchids.

He described it (the Jamaican doctor bird) as the gem of Jamaican ornithology:

"Several times it came close to me, as I sat motionless with delight, and holding my breath for fear of alarming it, and driving it away; it seemed almost worth a voyage across the sea to behold so radiant a creature in all the wildness of its native freedom" (as quoted in Senior, 2003, p. 238).

Frederic Cassidy had a theory that the bird is an object of superstition. Back then, the Arawaks (who were one of the early settlers on the island) spread the belief that the bird had some magical powers. To add to that, they also believed that it was the reincarnation of dead souls. This was the reason for them calling the bird the ‘God bird’.

In most rural parts of Jamaica today, there is a belief that killing a doctor bird will bring bad fortune, or in other words, bring bad luck.

It is not easy, however, to kill a doctor bird. This belief is manifested in a folk song which says:

"It is a clever bird which cannot be easily killed".

The Jamaican doctor bird has been immortalized in Jamaican folklore and song for many years.

Take a look at the hummingbird at the Rocklands Bird Sanctuary in Anchovy, Jamaica; just outside of Montego Bay

I love seeing the Jamaican hummingbird in flight, or when it is drinking water from a source. I could never get my hands on one though whether to have it land on my hand or to just touch. It is just too fast.

I learned a great deal about the Jamaican Doctor Bird from historical data at museums, and environmentalists. However, seeing one for myself many times is just breath-taking.

Come and see for yourself one of these days :-). And if you are a Jamaican and you have not yet seen one up close and personal, make it your point of duty to get a first hand look at the the great indigenous Jamaican doctor bird.