St Andrew Jamaica was one of the first parishes to be established by Law in 1867.

Prior to that it was known at the time as Liguanea.

“Liguanea” is one of the few surviving Arawak words, presumably stemming from the word iguana, meaning “lizard”.

St. Andrew as an area of approximately 455 km2 or 176 square miles and is located in the County of Surrey.

The parish stretches from Cross Roads to Rockfort in the East and reaches up into the Blue Mountains. It shares borders with St. Thomas, Portland, St. Mary and St. Catherine. 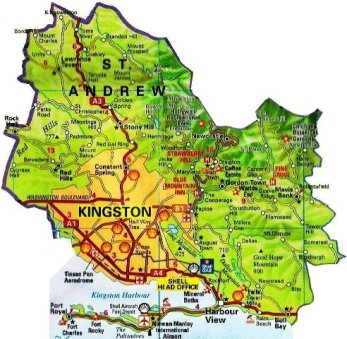 The capital of St. Andrew Jamaica is Half way Tree (HWT), and it is served by the Kingston 10 Post Office.

Constant Spring - It takes its name from a sugar plantation and the spring which once gushed from nearby hills, through the lush green golf course, down on to the Liguanea Plains. Today it is another of the main centres of commerce in the Corporate Area.

Liguanea - This was the original name of the Parish of St Andrew Jamaica, However, it now only refers to the small commercial centre mid-way between Half-Way Tree and Papine. 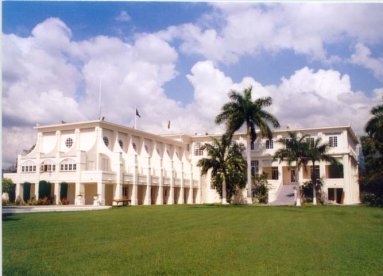 Located at Hope Road in St. Andrew, King’s House is the official residence of Jamaica’s Head of State, the Governor-General. King’s House became the residence of the British governor when the seat of government was moved from Spanish Town to Kingston in 1872 and remained so until Independence in 1962. It was wrecked in the earthquake of 1907 and rebuilt in 1909 from designs by Sir Charles Nicholson. 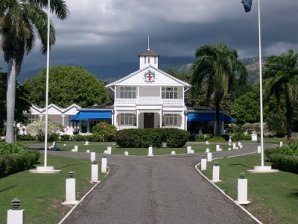 Known formerly as Prospect Pen, and was constructed either in the late seventeenth century or early eighteenth century. In 1928, Vale Royal was acquired by the British Government and became the official residence of the Colonial Secretary, next to the governor, the most important official of the day. It is one of the few remaining houses in Kingston which has a lookout tower on the roof which had allowed owners to keep track of the movement of ships in the harbour.

It is the official residence of the Prime Minister of Jamaica. 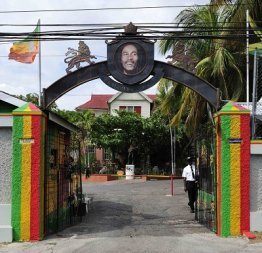 The Bob Marley Museum is a museum in Kingston, Jamaica, dedicated to the reggae musician Bob Marley. The museum is currently located at 56 Hope Road, Kingston 6, and is Bob Marley's former place of residence. It was home to the Tuff Gong record label which was founded by The Wailers in 1970.

Some Other Important Places Located in St Andrew Jamaica

Some People Associated With The Parish of St. Andrew

Some Towns, Villages and Communities in St Andrew Jamaica