George William Gordon was born in the year 1820 to a slave mother, Ann Rattray, and a Scottish planter father, Joseph Gordon. He was the second (2nd) of eight (8) children.

George had no formal schooling, he was self-educated. He basically taught himself to read and write and perform basic accounting functions.

George was about the age of eighteen when slavery was abolished (ended). At this age he was seen as a handsome, intelligent and popular young man who had a natural gift and passion for public speaking. He then went on to become a business man and a landowner in the parish of St. Thomas. He was also attorney to several sugar estates in Jamaica.

In the face of attempts to crush the spirit of the freed people of Jamaica and again reduce them to slavery, George Gordon entered politics. Though he meant well, he faced severe odds, as the people whose interests he sought to serve did not qualify to vote. What a drawback!! 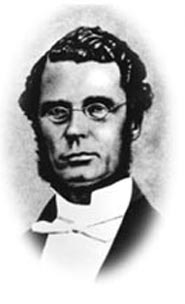 Being the type of person he was, he subdivided his own lands, selling farm lots to the people as cheaply as possible, and he organized a marketing system through which they could sell their produce at fair prices.

Gordon later went on to urge the people to protest against and resist the oppressive and unjust conditions under which they were forced to live.

Further down the years in his life, Gordon found out that that a summon was out for his arrest. Having heard that, he took himself in to Governor Eyre. Gordon was then arrested and charged for complicity in what is now called the Morant Bay Rebellion in 1865. He was then illegally tried by Court Martial and, inspite of a lack of evidence, convicted and sentenced to death. He was later executed on October 23, 1865.

On October 27, 1960, the Jamaican Parliament named the building where the Parliament Meetings would be kept in his honour. It was named the George William Gordon House, often just called, "Gordon House".

After independence he was given the nation's highest honor, The Order of  National Hero. This is why today we refer to him as The Right Excellent George William Gordon.

George Gordon is now associated with the $10 coin. His image is embedded in the coin which was first circulated in March 1999 to replace the ever so popular $10 paper note.

For a detailed outline of The Right Excellent George William Gordon's Life you can visit: http://www.georgewilliamgordon.com/