Portland can be classified as either the second smallest parish or the seventh largest parish on the island of Jamaica. It measures a size of approximately 814 square kilometres and is located on the northeast coast of Jamaica.

It is bordered by Saint Thomas to the south and St. Mary to the west. It is also located in the county of Surrey.

Now for some trivia. You know I would not be a good teacher if I did not ask any questions... so hear goes.

What is the capital of Portland...?

Well, there you go, you are so correct again. It is Port Antonio.

Port Antonio is about 100 kilometres or 60 miles from Kingston. It is one of the major tourist attraction parishes and is the shipping port for coconuts and bananas.

Well so much for the capital town, let us get back to the parish itself. You know there has to be some information on its location as well as other geographical elements. So let's get started. 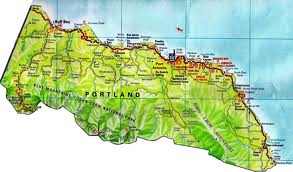 If you need to locate the parish you can find it at latitude 18º 10'N and longitude 75º 27'W. And again that is measured from the point of the town center. It is a very versatile parish ranging from the high point of the famous Blue Mountains straight down to the North coast.

For your added information, the Blue Mountains boasts a height of 7,402 feet or 2256 meters above sea level.

Portland Jamaica is well known for its rich, fertile soil and beaches among other elements. Another noted fact is that this parish has the highest amount of rainfall per year.

Still on the note of water, did you know that there are 17 rivers located in the parish? Oh yes, I know you had some idea but maybe did not know the actual figure. Yes, and the two largest of these are the Rio Grande River and Hectors River. There are also a lot of waterfalls here along with some caves, bays and hills.

There are actually 14 caves in the parish. Some of these caves can be found in Orange Bay, Hope Bay, Port Antonio, Long Bay, and Buff Bay just to name a few.

There are quite a number of residents living in this parish. Based on the 2001 census the population was estimated at 82,000, with 15,000 of those living in the capital, Port Antonio.

Remember I said that Portland was one of the largest tourist parishes in Jamaica? Well let me share some info with you about its tourist attractions, agriculture and other elements.

Portland is one of the largest tourist areas in Jamaica. Reason for this is that there are a lot of properties there that are owned by the wealthy. There are also a lot of facilities and attractions located there. Some of these include:

The Boston Jerk Centre is the place to be when travelling to that part of the island. That is my favorite rest stop every time. They are famous for their jerked foods including pork, chicken, sausage, etc.

Portland is also famous for its filming attributes. There has been a lot of filming in the parish from as early as 1954, but the mark of the filming era came to life when the epic Jamaican movie, "The Harder They Come" was filmed in 1972. The most recent filming was done by Rihanna, shooting her video, "Man Down", in early 2011. 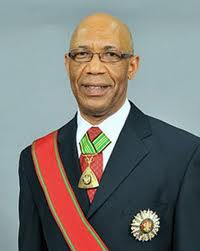 There are some other elements that I could share with you about this wonderful parish, including some famous people who reside here or was born here, however, It would just be too much. I will however give you a sample of some of these people.

So I hope the little that I have shared with you have given you a better insight as to the parish of Portland Jamaica. If you have other questions or other info that you would love to share you will be able to do so very soon.