Port Antonio, Portland, on Jamaica’s eastern coast, is snugly located between the Blue Mountains and the Caribbean Sea.

The area is still, thankfully considered relatively virgin territory and Frenchman’s Cove is a perfectly secluded spot that will make you fall in love with the water instantly.

Frenchman's Cove was built by a man named Garfield Weston.

He was a billionaire whose business empire included Fortnum and Mason.

The resort was run as a "no expenses spares" VIP destination and used to be one of the most exclusive (and, indeed, expensive) resorts in the whole world.

One of the most beautiful beaches in the Caribbean, let alone Jamaica, this white-sanded shore, set against a magnificent backdrop of exotic tropical gardens and crystal-clear mountain streams, is so idyllic.

It’s no wonder it was featured in the major motion pictures Club Paradise and Treasure Island. 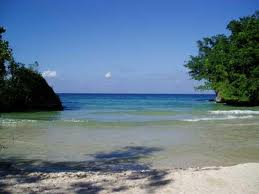 Frenchman’s Cove is tucked between two rocky bluffs and consists of a lagoon which meanders around a bar of sand from one direction while the sea barrels in from the other, pinched between two tiny headlands that are overhung with greenery. This gives the beach a luminous green light. 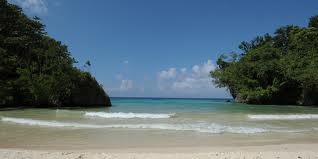 Visitors pay a small fee for entry but it is well worth it. You enter through some lush gardens, which then opens up into a gorgeous little secluded beach cove. It also has a fresh water river flowing into the beach.

Lots of fish in the river, as well as a rope and swing for the kids to play with. There is also a jerk hut on the beach with drinks and food made and done to order, as well very clean bathrooms.

To come to Jamaica or LIVE in Jamaica and not ever visit Frenchman's Cove would be like going to the movie theater to only buy popcorn instead of watching a movie. It just makes no sense!

So the next time you are planning a trip to Jamaica or even a beach trip in Jamaica, be sure to check out Frenchmans Cove, I promise you, you will LOVE it.

Here is a video clip of the beach, enjoy.

Back To Jamaica Beaches