Edna Manley was born in Yorkshire, England in 1900 to a Jamaican mother and an English father. She lived a full life and died on February 2, 1987.

Throughout her life, she studied at various art schools in England including St, Michael's School of Art, London, and privately with Maurice Harding, the animal sculptor.

She got married to Norman Manley in the year 1921 and then in 1922 moved to Jamaica with him.

Art as it existed in Jamaica back then could not have interested Edna. Sculpture was almost non-existent and painting was limited to a conservative water-colour landscape tradition, practiced essentially by amateurs.

Yet, her own work changed dramatically after her arrival in Jamaica. 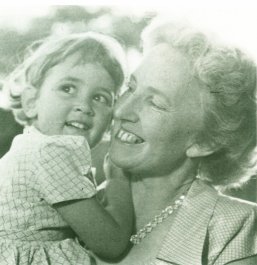 There was a tremendous leap from the 'romantic realist' studies done up to the time of her departure from England to her first Jamaican work, "the Beadseller". Shortly after, the Beadseller was to have a male counterpart, "the Listener", after which Edna went to England in 1923 with her two plasters. The visit proved fruitful and she had the plasters cast into bronze and she was accepted into the Society of Women's Artists and had Beadseller displayed in their 1924 Exhibition.

Back in Jamaica in early 1924, she quickly set to work with new carving tools and produced her piece called "Wisdom" and then "the Ape". At that time too, she began to model realistic portraits in clay first of Norman and the two-year-old Douglas and then of a friend, Esther Chapman. Then, testing the possibilities of her new medium, she did a head of another friend, Leslie Clerk, in wood.

The artist's various submissions to the exhibitions of the Society of Women Artists began to be noticed and in 1927 two French Journals - Les Artistes D'Aujourd "Hui and La Revue Moderne- singled out her work for praise. In England the interest in her work began to grow and in 1929, Edna Manley returned there with a group of recently completed sculpture including "Eve", the "Torso of Woman", "Boy with Reed" and "the Ape" to exhibit in the Goupil Summer Exhibition.

In London on her 1929 visit, she discovered a new medium of artwork creation. She wrote to Norman Manley, "I'm going eventually to carve stone". This was the preferred medium of the direct carvers whom she would have been observing at that time, and on her return to Jamaica later that year she began to carve in imported materials, namely, Hopeton-wood stone, Caen-stone, Portland stone and Sandstone.

Throughout her career, Edna passed through a series of phases, each representing her stages in the development of her life and that of Jamaica.

Here is a breakdown of her work and the periods in which they occurred:

Negro Aroused (1935 - 1940): This represented a search for a new order, a vision of a people being awakened to a new consciousness. Chief among her works at this time were "Mountain Girl", "Negro Aroused", "The Prophet", and "Pocomania."

The Dying God Series (1941 - 1948): Works including "Before Thought", "the Forerunner", "Before Truth", and "Into the Mist". These are at one and the same time her most private yet universal works. In them are elements of a personal symbolism based on her own intimate relationships with her husband and family.

The Public Year and Public Commissions (1949 - 1969): At this time there is intense pressure on family and political life. Works at this time are isolated pieces, usually commissions. these include "The Hills of Papine", "The Mountains" and ALL the "All Saints Crucifix".

A Period of Mourning (1969-1974): This is the period of illness and death of Norman Manley. She does works which included "Angel", "the Grief of Mary", "Journey", among others.

Mrs. Edna Manley has played a major pioneering role in the history of 20th century Jamaican art. Her works are in private collections, galleries and public buildings worldwide. Since 1924 she exhibited in many one woman and group exhibitions mainly in London, the United States, the Caribbean and in Jamaica .

In 1929 she was awarded the Institute of Jamaica's Silver Musgrave Medal. In 1943 she became the first recipient of the gold Musgrave Medal for her outstanding contribution and leadership in the arts in Jamaica .

Edna was co-founder of the Jamaica School of Art in 1950. She stopped carving in wood in 1974 with "Journey" and all her subsequent works were carved in clay and cast.

Later in 1977 she received the Honorary Degree of Doctor of Letters from the University of West Indies, Kingston. In 1980 at the National Gallery Retrospective Exhibition "Edna Manley the Seventies", she was awarded the Order of Merit.