St James Jamaica is a suburban parish located on the north-west end of the island. Its capital is Montego Bay. The name Montego Bay was derived from the Spanish word 'Manteca', which means lard, because many wild hogs were found there from which lard was made.

St. James is Jamaica's fourth smallest parish measuring just about 595 square km. The 2008 census recorded that the parish had a population of 200,000. St. James Jamaica is located in the county of Cornwall with bordering parishes Hanover, St. Elizabeth, Trelawny and Westmoreland. For the geographic enthusiast it is said to be located at Latitude 18°31'N and Longitude 77°59'W.

This parish is the birthplace of one of our National Heroes, The Right Excellent Samuel Sharpe. It is also the resident parish of the Donald Sangster International Airport.

Today, Saint James is one of the fastest growing parishes on the island with large credits going to its capital city, Montego Bay, because it is seen as an alternative to the overpopulated Kingston and Saint Andrew Corporate Area. 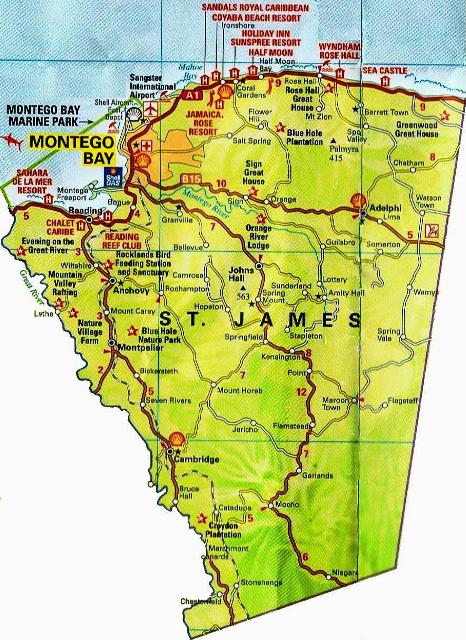 Agricultural activities include forestry, and the production of sugar cane and other domestic crops. There are approximately 60 manufacturing establishments in the south of the parish, mainly for garment, woodwork, and food processing. There are also many industrial zones, including The Montego Free Zone, Bogue Industrial Estate and Ironshore.

Tourism is the MAIN source of employment in this parish. It is recorded that one in every four persons are employed in tourism. There are so many famous hotels located in St James Jamaica, most of which are located in the Rose Hall area. Some of these include Doctors Cave Beach Hotel, The Ritz Carlton Hotel, Iberostar Hotel, Wyndham Rose Hall and the Half Moon Hotel.

The History of St James Jamaica

St. James was one of the second group of parishes formed in Jamaica and is said to have been named by Sir Thomas Modyford in 1665, for the Duke of York who later became King James II. Located in this parish is “Mellila” the site of the first town built by the Spaniards in Jamaica. It is believed that the first Jamaican migrant set sail with Columbus from “El Cabo de Buen Tiempo” (Montego Bay’s original name), for life in the “Old World”. Along the coastal area of St. James, remains of Jamaica’s original inhabitants, the Tainos, have been located. They are referred to as the “Fairfield People” in honour of a site near Montego Bay where characteristic examples of their pottery have been found.

In 1795, the Parish was turned upside down by the Maroons in the interior who took up arms again after decades of peace. Montego Bay became the headquarters of the governor, the Earl of Balcarres, who came to personally direct operations against them, and it was from here that the Trelawny Maroons were put aboard ships in the harbour that eventually sailed to Halifax, Nova Scotia, Canada. Montego Bay also witnessed the final act of the last slave uprising. The ‘Christmas Rebellion’ of 1831-1832 that engulfed the western parishes. Under martial law the slaves were tried in the courthouse and over 300 of them were hanged at the Parade, now called SAMUEL SHARPE SQUARE where there is a memorial to the leader Samuel Sharpe.

A semi-circular structure which closely resembles an arena, prospective buyers came here to view slaves who were on parade. Located on the grounds of the Rerrie’s House in Montego Bay, the Ring is said to have belonged to a “Morishe” or slave leader.

The story of this creek goes back to the Spanish era when two little girls (one a free Spaniard and one a slave) in pursuit of a crab that had disappeared under a stone, discovered an underground stream of water. 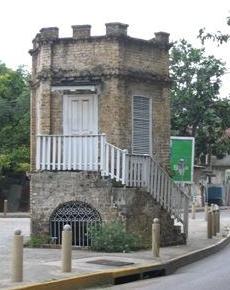 The stream was named “El Rio de Camarones” – the River of the Crabs. Montego Bay’s sole source of drinking water for many decades, the Creek was eventually dammed and harnessed. An oval-shaped building about 20 feet (6.1m) high and 10 feet (3.0m) wide was erected over the stream to protect the water which rose to the surface of the road and flowed towards the area.

Popularly called “the Dome”, this structure served its purpose well until 1957, when an earthquake shifted the floor of the creek flowing under the Dome thus changing the course of flow. There is now no water at the bottom of the Dome. It stands as an historic monument, reminiscent of the period of the Spanish occupancy of Jamaica.

There are a number of places to visit in St James Jamaica when you visit the parish. So feel free to explore as much as you can.