Trelawny Jamaica was formed from the eastern part of St. James in 1770 after the wealthy planters of the area complained that Montego Bay, the capital city, was too far away for them to go to conduct business. The parish was named for Sir William Trelawny, Governor of Jamaica when the parish came into being.

The parish was said to have approximately 73,066 residents according to the 2001 island-wide Census.

The capital of Trelawny is Falmouth and it has major towns Clarks Town, Duncans, Wakefield, Wait-A-Bit, Albert Town etc. This parish is found in the county of Cornwall and is popularly known for its agriculture, manufacturing and tourism. Rum and sugar are its main products, however, other crops include yams, bananas, vegetables, coffee, strawberries, pimento, coconut and ginger.

Trelawny goes down in Jamaica’s history as the parish with the most sugar estates and sugar factories. At one time the estates numbered as many as a hundred, and there were no less than forty sugar factories. By 1927, the number of estates had dwindled to 16, but Trelawny, even then, produced more sugar than any other parish in the island. The early days of Trelawny pivoted around sugar which provided a good living for many in the parish. There were large and small estates which varied technologically from big mechanized plants to the one-man donkey-drawn mill. In the early 1900s, a fall in the price of sugar on the world market resulted in the decline of Trelawny’s sugar industry. Banana cultivation took over as the major agricultural enterprise. 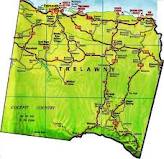 The first capital of the parish was known as Martha Brae but its size and location raised doubts as to its suitability as a permanent parish capital. It was felt that since Trelawny had a sea-coast it needed a seaport for its chief town. The honour of the “second capital of Trelawny” consequently fell to the town of Falmouth. Falmouth was established in 1790, at a time when sugar was booming. When sugar declined, so did Falmouth. In its grand days, the town supported many businesses and more than one weekly newspaper. Once the busiest port on the north coast, Falmouth was the place from which sugar was shipped and where important goods needed by the estates in the interior were landed.

With the advent of steamships, Falmouth’s former sea traffic was diverted to ports which could accommodate these larger ships. Consequently, by 1890 Falmouth was practically a ghost town. Today, except for Hampden Estate, on the border of St. James and Trelawny, only Long Pond Estate remains of the one hundred estates that used to grace the parish.

Trelawny is the birthplace of a number of great athletes such as:

Also hailing from Trelawny is Rex Nettleford, and Samardo Samuels who now plays for the Cleveland Cavaliers.

Trelawny Jamaica is a popular parish and it boasts producing some of Jamaica's finest and most recognized people. Hope you got a great insight of this wonderful parish.