The Jamaican Coat of Arms

The Jamaican Coat of Arms has a male and female member who are said to be of the Taino tribe (Jamaica's first inhabitants).

It also has a shield, five golden pineapples, a Royal Helmet and Mantlings, and a crocodile.

The male and female Tainos stand on either side of the shield with the pineapples on it.

They are both wearing skirts with a red waistband.

The male Taino wears a head-dress with alternating short white and red feathers and holds a bow (from a bow and arrow) in his left hand.

The female Taino wears a similar head-dress but with a red feather and white ermine headband and she holds a basket of fruits in her right hand.

The shield bears a red cross on a white background, which is similar to the English flag.

It is crowned with a Royal Helmet and the Mantlings of the British Monarchy (which is a distinction accorded to Jamaica). 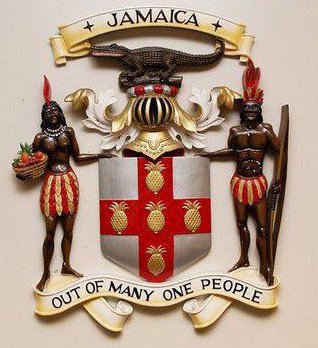 On top of that helmet sits a crocodile, which is an indigenous reptile of Jamaica. Just below that is the Jamaican Motto:

"OUT OF MANY ONE PEOPLE"

This motto is based on the population's multi-racial roots. From Africans to Spanish, to English to Chinese, etc.

The Jamaican Coat of Arms was granted to Jamaica on February 3, 1661 under Royal Warrant. Jamaica was the first British colony to receive its own arms.

It was originally designed by William Sandcroft who then became the Archbishop of Canterbury in 1677.

However, credit for the coat of arms is sometimes mistakenly given to a man named William Juxon because he was the current serving Archbishop of Canterbury when the Jamaica Coat of Arms was designed.

The Coat of Arms is also sometimes incorrectly stated to be granted to Jamaica in the year 1662 instead of 1661. This is as a result of the dating convention that was in use at the time.

The design of the Arms is believed to have undergone several changes over many years but only three official significant changes have ever been recorded. These years of changes are in 1692, 1957 and 1962.

Today, the Jamaican Coat of Arms appears on every single piece of our bank notes and coins as well as on ALL national documents. It is also used, in many respects, as the final seal of governmental approval.

Top of Jamaican Coat of Arms