Photo courtesy of The Jamaica Gleaner

Jamaican foods are enjoyed by many internationally and locally and some of them can either be eaten alone or added with something else to get a meal that is mouth-watering and filling.

Below is a list of some of the more famous Jamaican foods with some explanations as to what they are, where they came from and what they are used for.

The list is by no means comprehensive and will just serve as an introduction to the many foods, fruits, vegetables, and dishes that we Jamaicans enjoy here.

You may know about some of them already and you can find them in your local grocery store or you may even have been learning about them from a friendly neighbour.

Whichever way, I hope you find at least one item on the list that you never knew about and you are thankful that it was included for inclusion in your already wide knowledge base.

Jamaican Foods With Some Explanation

Ackee is a tree vegetable. It is referred to as a fruit that has to be cooked. Before they are fully developed, the pods that holds the ackee are peach in colour and tightly closed. When fully matured, they turn bright red in colour and is opened to expose the edible portion of three or sometimes four sections of golden flesh with a glossy black seed on the top.

To prepare, these sections are cleaned of their red lining, and the seed thrown away. It is then washed and boiled in water before being added to its accompaniments such as saltfish (salted codfish), tomatoes, onions, escallion, and pepper which will form Jamaica's national dish, ackee and saltfish. It is said that ackee resembles scrambled eggs when cooked and most people thinks that the taste is similar. Ackee is one of the most popular Jamaican foods.

Bammy is a round flat bread made from grated cassava, which is a tuber. Bammy comes in all different shapes and sizes ranging from wafer thin to one inch (1") thick. If the size is thick, it is usually soaked in coconut milk or warm water before being fried, grilled or steamed. Bammy can be served with fried or escoveitched fish as well as ackee and saltfish with avocado (pear) as an accompaniment. 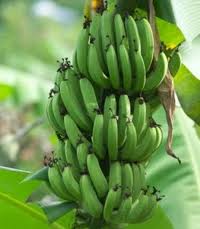 The banana is a very versatile fruit and also another one of the most popular Jamaican foods. It can be used ripe as the first fruit in the morning or even grilled with bacon on toast. The green bananas, fresh or dried, can be used to make our most enjoyed porridge.

The green banana used to be looked upon only as a crop that we export. Did you know though that green bananas were eaten during World War II by Jamaican instead of imported rice? It was not until then
that cooks started experimenting with it and calling it "long grain rice." Banana grows to a height of approximately 10 meters and bears one stem which usually consists of 50-200 fingers and weighs about 40-84 kilos.

You can boil the green bananas and team it with Rundown, pickled fish, or meat cooked in coconut milk to make a delicious lunch. You can even grate it and mix it with flour to make dumplings. 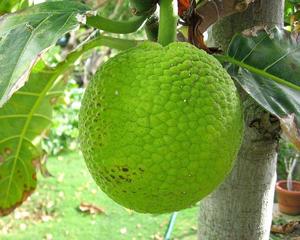 This is a very unique name for a fruit that intrigues most people who do not know it. Breadfruit trees were brought to the island by Captain Bligh on his second voyage to Jamaica in 1793. He brought over 350 trees which were planted in the Hope Botanical Gardens in Kingston, and other government botanical gardens across the island.

Breadfruit was intended to provide a supply of cheap food for slaves but it was unpopular to the point where for the first 50 years it was used to feed pigs. The trees can last a very long time and does not need any much attention and very little care.

Breadfruit can be used for a number of things. The young ones are used for boiling in soups and the mature ones used for stuffing, roasting or baking. They are also used to make puddings, drinks, wines, chips, salads, flour etc. There is a famous breadfruit named "yellow heart" which is grown in Portland and is the most sought after kind. This is also included in the list of top Jamaican foods.

Callaloo is a vegetable that closely resembles spinach in appearance and flavor. It is the main ingredient in the famous pepper-pot soup. Callaloo can be sauteed with onions and tomatoes to make a breakfast dish that can be served with a number of accompaniments. It is also used as a filling in the popular Jamaican vegetable patty, quiche and fritters.

Cassava is the main ingredient in bammies. It is also used to make farina and cassava meal, puddings, cakes and dumplings. This was known as one of the staple foods for the Arawaks along with corn. Cassava can either be sweet or bitter. The sweet cassava is usually eaten as yam or potato and the bitter ones are grated. After grating, the juice that is expressed and the starch that is extracted from the juice is used to give a good finish to cotton clothes and table linen. 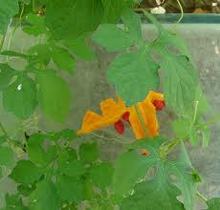 Cerasee is often pronounced "Sir-ru-si" by most Jamaicans. It is a member of the pumpkin family and the leaves of the plant is used for making tea. The tea is quite bitter but it is used for many reasons and remedies. One such purpose is for Jamaican pregnant women who feel it is necessary and very good for the unborn child's skin. The wide majority though feels that it is a cure for all other manner of ills, which include diabetes.

Cho-cho is a member of the squash family and is often considered as a must in beef soup. It is also used as a garnish for escoveitched fish and is essential for pickles. The other names for cho-cho are
"christophine" and "chayote". It can be boiled and served hot with butter or grated cheese and it also blends well with sugar and spices for a pie filling. Cho-cho is grown on a vine and it resembles a large pear and can either be green or white in color.

The coconut is a very popular fruit. It is used by many Jamaicans in a variety of dishes. The elements of the coconut such as the water, the milk, young jelly or hard flesh are what is used often when preparing dishes. Coconut water is said to be high in potassium, but the most is garnered from green
young coconuts. The white juice (coconut milk) extracted from dried coconuts, is used in dishes such
as rice and peas (kidney beans), mackerel Rundown, curried dishes, and many other Jamaican favorites. This is just another on of the versatile Jamaican foods.

Back in the day, the fibrous coir of the dry coconut husk was used to make mattresses, but today it is mostly use as part of potting soil for our potted plants.

Coconut trees are huge, high in nature and are very strong. The tree's long shiny leaves can be plaited to make welcome arches for weddings. The mesh on the base of the tree can be used as a strainer and the spear of the leaves are stripped and used to form welcome bouquets in many Jamaican hotel foyers. The shell of the dry coconut can be used for fuel or as a container for dishes.

So the above list of some of the most popular Jamaican foods is by no means complete. It was just to give you an idea of the kind of food we have here on our little island.

Back To Jamaican Cuisine