There seems to be this great fascination with oats (oatmeal) that one can only wonder why so many people swear by this Jamaican porridge. Maybe it's the easy preparation time or the end result, which is tasty and filling. Whatever it is though, it gives this porridge an edge over some of the other porridges.

Oats is regarded as one of Jamaica’s premier health foods. It is a regular part of MOST Jamaican's diet, especially sports men and women. It is also an easy breakfast menu item that is enjoyed by many children before having a full day at school...

...Easier than preparing toast and eggs if you are running late in the mornings.

It is a very good source of fiber nutrient that keeps you feeling full for about 3 hours after it is consumed.

Just eat a medium sized bowl of Oats (oatmeal) porridge in the morning and drink a tall glass of water and you see how long you feel full throughout the day.

It is also used as an aphrodisiac in many local drinks that are responsible to “put it back.” Well so they say, especially the men! These drinks are usually homemade and are filled with the mixer's desired additional ingredients.

Well, without further delay, here is the Recipe for the Jamaican Oats (Oatmeal) Porridge! 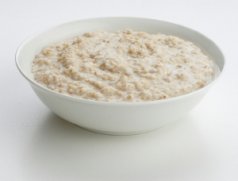 1. Bring the 3 cups of water to a boil in a saucepan

2. Add the oats (oatmeal) to the boiling water and stir to avoid the oats sticking to the bottom of the pot.

3. Reduce the heat to medium and let the porridge simmer for about fifteen (15) minutes.

4. Sweeten the oats porridge using the same method as when sweetening the Jamaican cornmeal porridge.

It is as simple as that. It is said that the Jamaican Oats Porridge Recipe is by far the EASIEST Jamaican porridge to prepare!

You have the recipe at your fingertips, so use it and be the judge of its simplicity!

Try it for yourself today and feel free to share this recipe with other family members and friends!

Back To Jamaican Porridge Recipes

Back To Jamaican Recipes