It signifies the birth of our nation...

The Flag of Jamaica brings to mind memories of past achievements and gives inspiration towards further success.

It is flown on many triumphant occasions, showing the pride that Jamaicans have in their country and in the flag itself.

It is a simple, yet well-recognized flag with a design that can be remembered by the world.

Read more about its design below...

A bipartisan committee of the Jamaica House of Representatives designed the Jamaican Flag which consists of a diagonal cross with four triangles placed side by side. 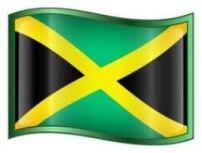 "The sun shineth, the land is green and the people are strong and creative" is the symbolism of the colours of the flag.

Black depicts the strength and creativity of the people

Gold, the natural wealth and beauty of sunlight; and

Code For Use of The Jamaican Flag

These are simple codes of conduct to follow and respect as it relates to our pride and joy of having our own flag after years of dependence. The flag of Jamaica was and still is the most important of the national symbols since 1962.

It was flown alongside the playing of the National Anthem to commence our freedom as a nation.