Jamaican cow foot recipe - The idea of cooking the cow's feet is not one of the greatest feats achieved in the Jamaican culinary tradition by any means.

The thought of it just grosses out a lot of people but I assure you, once you have tried cow foot Jamaican style, you may not even think about not wanting to cook it again.

Here is a little history about how cow foot became a part of the Jamaican cuisine.

Back in the days, between the 1600’s and 1700’s plantation era, the upper classes would take the best parts of the cow when it was killed and leave the so-called “fifth quarters”, which were the head, feet, tail, internal organs, and skin, for the hired hands and slaves.

Not worrying about the "what lefts", the workers took the "fifth quarters" and made delicious delicacies that are still enjoyed today by many people in Jamaica, including the upper classes themselves, belive it or not.

As a "fifth quarter" stew, cow foot was a kind of substitute for oxtail sometimes when oxtail was not available. Why? You should guess by now, the cow has but one tail and four feet. You don’t have to do the math to see the advantage the feet has.

Of course cow foot was the kind of stew you would cook mid- week, because the weekends were reserved for chicken soup or beef soup, and other Jamaican foods too.

So give this Jamaican Cow Foot Recipe a try and let us know how it turned out and if you liked or disliked it. 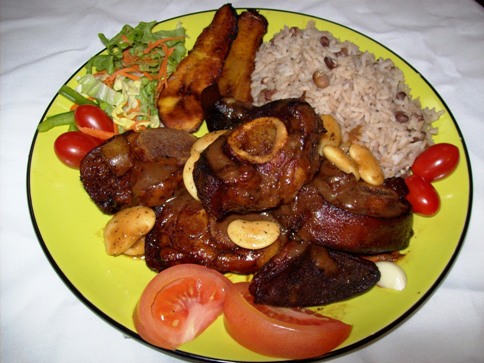 Cook's Tip: Purchase the cow foot from the butcher shop or grocery store already chopped, cleaned, and ready to cook because this will save you a lot of time in the kitchen.

1. Wash meat (cow foot) in cold water and then put it and the salt into the pressure cooker with about 5 cups of water.

2. Allow the pressure cooker to boil the foot until the pot starts to make that steaming sound. Wait five minutes after the sound starts and then turn the flame off.

3. Do not remove the pot from the stove as yet. Let the pot cool down a little, wait about five minutes. You do not want to remove the cover from pot while it’s hot, you can hurt yourself if you do this.

4. Put the pot under running water in the kitchen sink and let it further cool the pot down.

5. Pour out the contents into a saucepan and cook the cow foot some more with all the other ingredients, except the butter bean, if the meat is not already soft.

6. You can skim the fat off the top of the pot with a spoon while it boils.

7. Taste the stew 7 minutes after the seasonings are added. Get a second opinion from someone about the taste of the stew at this point.

8. You could also add some spinners (see recipe) to the stew at this point, this is optional.

9. Let the stew cook on medium heat and then add the butter bean to the stew 5 minutes before removing it from the fire.

Tip: You can serve this cow foot stew with bread, white rice, yams, dumplings, or potatoes.

I am sure that you will find this Jamaican cow foot recipe easy and tasty. Your feedback is appreciated!!

Back To Jamaican Recipes