In 1966 he entered the University of the West Indies where he earned a BSc. degree in Economics in 1969. In that same year of 1969 he was elected to the Central Executive of the Jamaica Labour Party at the young age of 21 and was subsequently elected to Parliament in 1972 at the age of 24.

He was appointed Minister of Construction in 1980 serving in that position until 1989 and in that capacity was elected Chairman of the United Nations Commission on Human Settlements for the period 1984 to 1985.

He was the Opposition Spokesman on Finance and Chairman of the Public Accounts Committee during the years of 1989 and 1995. He has served as a member of the Electoral Advisory Committee, the Board of Governors of the Institute of Jamaica and the Board of Directors of the National Lotteries Commission. 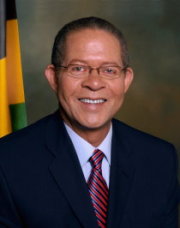 He was appointed Senator and Opposition spokesman on Foreign Affairs and Foreign Trade in 2002, and held both positions up to April 2005. On February 20, 2005, he was elected Leader of the Jamaica Labour Party. On April 13, 2005 he was elected Member of Parliament for West Kingston. He was the Leader of the Opposition from April 21, 2005 to September 10, 2007.

He was sworn in as Jamaica's eighth Prime Minister on September 11, 2007, where he served until his resignation from office in the year 2011. He is then to be officially labeled as The Most Honourable Orette Bruce Golding because he was conferred with the Order of the Nation.

Mr. Golding is known as a businessman. He and his wife, Lorna Golding, were married in 1972 and they
have one son and two daughters.