He succeeded the Most Honourable Orette Bruce Golding.

He is Jamaica's youngest Prime Minister and the first Jamaican head of Government to be born after the country gained Independence in 1962. He was also conferred with the Order of the Nation upon being sworn in as Prime Minister.

His complete title is The Most Honourable Andrew Michael Holness, M.P. and his tenure of being Prime Minister was a short one. To be more precise, it was from October 23, 2011 to December 28, 2011.

Prime Minister Holness has described himself as a libertarian on the social side and a fiscal conservative on the economic side, and has expressed commitment to promoting and protecting human rights.

As a transformational leader, Prime Minister Andrew Holness believes the political arena should "give room to all people to participate provided that they meet certain standards." As an economic conservative, he has committed to prudence in government spending, fiscal discipline and debt management. On the social side, he believes education must be one of the most critical ingredients of national development.

Born to working class parents in Spanish Town, the capital of St. Catherine, Mr. Holness is the son of civil servant, Mrs. Carol Harvey Williams and farmer, Morris Holness. He attended the St. Catherine High school where he was both Head Boy and valedictorian. 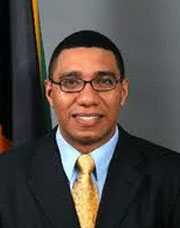 Mr. Holness served as Executive Director in the Voluntary Organization for the Upliftment of Children (VOUCH) from 1994 to 1996 and then joined the Premium Group of Companies, where he was special assistant to former Prime Minister, Most Hon. Edward Seaga.

In 1997, he became Member of Parliament for West Central St. Andrew and served as Opposition Spokesperson on Land and Development from 1999 to 2002. In 2002, he shadowed the portfolio of Housing, and then Education in 2005.

He was sworn in as Minister of Education in September 2007 following the victory of the Jamaica Labour Party (JLP) in the General Election that year. As Prime Minister he chose to retain the education portfolio.

Prime Minister Holness has two sisters and three brothers. He a Seventh Day Adventist by faith. He is married to Juliet, who is a chartered accountant and business woman and they have two sons, Adam and Matthew.