The Order of The Nation -
Who Wears It and Why! 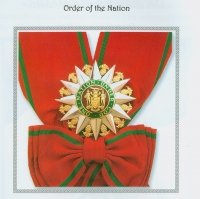 The Order of the Nation is the second highest Order and is conferred on the Governor-General and Prime
Minister, upon whom the Order of National Hero was not previously conferred.

Recipients of this honour are entitled to be styled formally as 'The Most Honourable', wear the insignia of the Order, and use the post nominal letters ‘ON’.

Spouses of the recipients are also styled 'The Most Honourable'.

The insignia of the Order of Nation bears the motto which is...

‘One Nation Under God’.

It consists of a magnificent breast star bearing the heraldic Coat of Arms of Jamaica on a red enamelled background in the center, and surrounded by the motto of the Order in gold lettering on green enamel.

Between the points of the star are gold representations of pineapples. The broad watered silk sash is in a brilliant red with narrow green ending.

Persons Who Have Received The Order of The Nation So Far

This Order of the Nation has been conferred on:

It has also been conferred on:

Note again that ALL the Prime Ministers have not been listed above because some of them have been already conferred with the Order of National Hero. These include:

The above two would have already had the title of 'The Right Excellent.'

So it is important that you do not get it confused as to who wears what title.

This Order of Nation comes with the title 'The Most Honourable.'

Top of The Order Of The Nation