She served as Prime Minister from March 2006 to September 2007, after having served for 17 years as a Cabinet Minister with portfolio responsibility for:

She was conferred with the Order of the Nation in May of 2006.

Mrs. Simpson Miller has been the President of the People's National Party since the year 2006 and Member of Parliament (MP) since 1976. 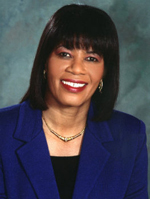 This Prime Minister has a distinguished record of service at the regional and international levels:

Mrs. Simpson Miller holds a Bachelor of Arts Degree in Public Administration, an Honorary Doctorate from the Union Institute and University (UI&U), Florida and has participated in the Leaders in Development Executive Programme at the JFK School of Government, Harvard University.

In March 2007, Mrs. Simpson Miller was awarded the International Olympic Committee's World Women and Sport Trophy for her outstanding dedication to women in Jamaican sports - both athletes and administrators.

The leading architect of Jamaica's Master Plan for Sustainable Tourism Development, Mrs. Simpson Miller has been tireless in promoting and strengthening urban renewal and community development, which have led to fundamental reforms in local government.

As Minister of Labour and Welfare, she presided over a significant expansion of Jamaica's Overseas Work Programme and under her watch, the National Insurance Scheme was transformed into a major component of the government's social protection system. She was also instrumental in establishing a Labour Chair in the University of the West Indies, Department of Government.

In 2009, she received the Distinguished Award for her dedication and commitment to urban renewal and community development from the Mayor, City of Miami and also the Bureau of Women's Affairs Award for
outstanding contribution to the advancement of women's affairs in Jamaica. Portia Simpson Miller was also invited to sit on the board of the United Nations Institute for Training and Research (UNITAR), and is presently a member of the board.

With all her achievements, Portia Simpson Miller, or "Mamma P" as she is socially dubbed, is truly deserving of holding the title of being the FIRST and ONLY female Jamaican Prime Minister!