P J Patterson is Jamaica’s most successful politician at national level, breaking the ‘third-term’ barrier. His style of leadership is not to rely on fiery rhetoric, but on fundamental principles of procedure.

He has done more than any other political leader to date, to empower his associates and to structure a party committed to negotiate peace and settle differences through a reconciling process rather than confrontation.

His wide experience at national, regional and international level, as a negotiator, has served him well in office as Prime Minister.

To describe P.J.'s personality and character is to say he is slim in build, slow of speech, sharp with wit and sure of words. That pretty much sums it up.

Also, he speaks in measured tones but prudently and perceptively, never missing the essence of issues, and never needing to apologize for statements.

His education included attending Calabar High School, the University College of the West Indies, and London School of Economics, England. 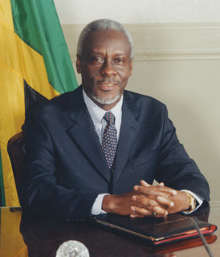 Before he was called to the bar though he got married on August 24, 1960 to Shirley Field-Ridley who was from Guyana. They had two children together, Richard and Sharon. Shirley, his wife, died in 1982.

Let us now take a look at his career and service to the country.

Career and Service to Country

His long and distinguished political career stretches back formally to the year 1958 when he joined the People’s National Party (PNP).

His first Cabinet post was that of Minister of Tourism which was in 1972. He has since served as Deputy Prime Minister and Minister of Foreign Affairs and Foreign Trade, that was during the years 1978 to 1980.

Again, P J Patterson served as Deputy Prime Minister and Minister of Development Planning and Production during the years 1989 to 1990.

Then his final role of being Deputy Prime Minister and Minister of Finance and Planning during the period 1990 to 1991.

After moving through several levels of the party, he finally become the party's President in 1992. This is the same year he became the sixth Prime Minister of Jamaica and was conferred with the Order of the Nation.

He would now be referred to as: