Michael Manley was born on December 10, 1924 to parents Norman Washington Manley, and his wife Edna Manley. His full name at birth was Michael Norman Manley.

Michael studied at Jamaica College from 1935 to 1943 and overseas at the London School of Economics (LSE) from 1945 to 1949. There, he came under the influence of Harold Laski, the man more responsible than any other for the training of men who later became Commonwealth Prime Ministers. At the LSE he gained academic honours.

Manley was a tall, handsome, forceful and flamboyant man. He has been undoubtedly Jamaica’s most eloquent, visionary, controversial, and dynamic leader since independence.

He has been a journalist, trade unionist, party president, senator, Cabinet Minister, Leader of the Opposition, Vice president of the Socialist International, and Prime Minister of Jamaica. 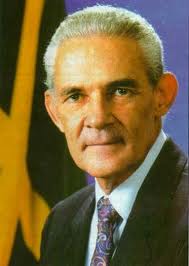 He has impacted the nation with a greater sense of importance and urgency regarding national identity, and, internationally, he has impacted the ideas of capitalist and socialist leaders with his advocacy of Democratic Socialism.

Micheal Manley was a prolific writer of articles and books. Some of his publications include:

He was married FIVE times, yes five times. His wives were:

Due to the fact that he was conferred with the honour of being awarded with The Order of The Nation upon becoming Prime Minister of Jamaica, his complete title is:

The Most Honourable Michael Norman Manley, ON, OM, OCC