The Order of Excellence -
Who Wears It and Why! 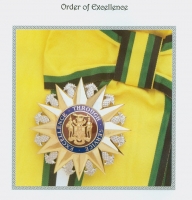 The Order of Excellence, which was created in 2003, is reserved for foreign heads of state or heads of government who has played an integral part in Jamaica's development.

This Order is ranked with the same precedence as the honour of the Order of the Nation.

That means that recipients of this Order are also styled ‘The Most Honourable’.

The insignia of the Order of Excellence is a twelve-point breast star in yellow gold, interspersed with representations of pineapples in white gold.

In the center is the heraldic Coat of Arms of Jamaica in yellow gold, superimposed on a red enamelled background and surrounded by the motto of the Order, which is...

The insignia is worn with a yellow shoulder sash edged with a narrow band of green and black in equal proportions.

Persons Who Have Received This Award So Far

Since its inception in 2003, the Order has been conferred on three foreign dignitaries, namely:

So this is a very rare order and as such you notice that it has not been awarded to many or any and any heads of state or heads of government.

Some kind of 'Excellent' service must be done by these state heads in order to be conferred with this Order of Excellence.

Top of The Order Of Excellence