The Order of Distinction -
Who Wears It and Why!

The Order of Distinction is said to be conferred upon any citizen who has rendered outstanding and important service to Jamaica in ANY field of endeavour.

This Order is divided into two (2) ranks:-

The rank of Commander is the higher of the two and is called the higher class.

Distinguished citizens of a country other than Jamaica may be conferred with this honour as honorary members.

The motto of this Order is ‘Distinction Through Service’. 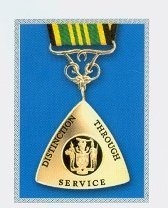 The insignia of this Order of Distinction in the rank of Commander is a triangular badge with curved sides. In the center is a black medallion bearing the heraldic Coat of Arms of Jamaica in gold. The words of the motto of the Order are in black.

The Badge is suspended from a silk collar riband (ribbon) of black, gold and green by a silver finial of two intertwined letter "J" attached to the uppermost point of the triangle. Members of this rank use the post nominal letters ‘CD’ and ‘CD (Hon)’ for the honorary members.

It is to be noted that Commanders take place and precedence immediately after Members and Honorary Members of the Order of Jamaica. Also, a Member or Honorary Member may be promoted from the rank of Officer to that of Commander.

Who Can Receive This Award:

The Honour of Order of Distinction is conferred upon Members and/or Honorary Members.

1. Commanders of the Order of Distinction are entitled to use the post nominal letters:

2. Officers of Order of Distinction are entitled to use the post nominal letters:

Top of The Order Of Distinction