The Order of Merit -
Who Wears It and Why! 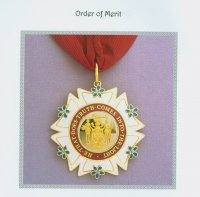 The Order of Merit is the third highest honour and may be conferred upon any citizen of Jamaica who has achieved eminent international distinction in his or her field of endeavour.

However, a distinguished citizen of a country other than Jamaica may also be conferred as an Honorary Member of this Order.

Here is a bit of important information that should be noted:

This Order may be conferred on no more than two persons in any given year and should have a total of fifteen (15) living members, other than honorary members.

The recipient or this national award is formally styled ‘The Honourable’ and uses the post nominal letters ‘OM’ for members and ‘OM (Hon)’ for honorary members.

The insignia of the Order of Merit is a collar badge suspended from a deep maroon silk riband (ribbon). The six-armed white enamelled star with twelve points has superimposed on it a lesser shaped star in silver.

Between each of the outer six points of the star is the blue Lignum Vitae flower of Jamaica. In the centre is the Coat of Arms of Jamaica in gold on a contrasting silver background, surrounded by the motto of the Order...

‘He That Does Truth Comes Into The Light’

...in gold lettering on red enamel.

Persons Who Have Received This Award So Far

These are just a few of the persons who have already been conferred with the award. It is to just give u an idea of the names and to match those names with the faces if you should ever hear about or see info on these persons later on in life.

Top of The Order Of Merit